Welcome to the first of 12 posts about sensory dough and our experiments to make them “taste safe”!

This months sensory dough is called foam dough. It is traditionally made from shaving cream and cornstarch / corn flour, which causes the resulting dough to be fluffy, silky and crumble / reform easily. Two of my 3 children still love to taste things while playing and as such I do not introduce anything that could be harmful if put into their little mouths.

My mission was to take this simple 2 ingredient play idea and make it safe for the younger ones.

I give you Taste safe foam dough! How did I do make the foam dough taste safe? 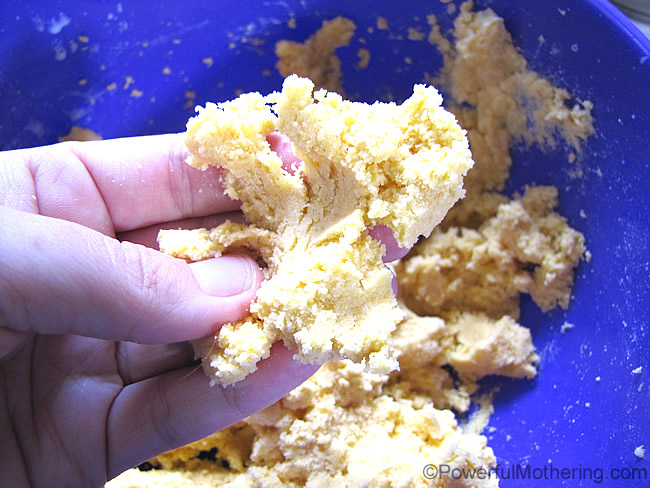 I added some to my bowl, yum, then added cornflour (mine is yellow in color and some would say it is cornmeal, according to the description it was cornflour to be used in thickening soups) I kind of liked the yellow color so did not add any coloring.

I also used an electric beater for this experiment as the cream was an instant mix variety where you had to add milk to make it. Although I used water instead. While beating I added cornflour bit by bit until it started sticking in the beaters.

At this time I tested the foam dough and found a satisfactory texture for play!

Next for the foam dough was the kid test! Oh, they liked the foam dough alright! Not as much as playdough though, but it did well. The texture although not silky smooth was smooth and fluffy. It also crumbed well and reformed into the shapes easily.

Yes, the younger two (18 month old and 3 year old) BOTH did a taste test despite my instructions not to, but that is the point to this entire experiment that I KNEW they would go and taste it. They did it twice and then no more.

I also had a taste of the dough to confirm the taste and can tell you it is very bland with a strong taste of cornflour, very unappetizing for the kids, so despite the first taste tests they shouldn’t go back for 3rds! I did put the foam dough into the fridge for next day play as it was late on our first test play. I advise this as a make and play with activity. The refrigerated foam dough lost some moisture besides the fact that it was sealed, making it stiff to play with. Fresh is better. My eldest (4) enjoyed making balls and driving his truck over the foam dough making imprints. The foam dough also had a nice feel to it and does not stick to little hands! My 18 month old spent much time poking it and the 3 year old carried it off to crumble onto the near by floor. (Luckily the floor is tiled and a quick sweep cleaned up that adventure) All in all I can happily say this was a successful experiment and with only 2 ingredients that I can keep in the cupboard for use whenever I want, a huge plus!

To recap: this is a toddler taste safe foam dough, made from 2 ingredients namely whipped cream and cornflour! This How to Make Foam Dough is just one of our taste safe experiments, catch up here for more!